Fitz is about to discover the truth about the Fool's prophecy. Having been resurrected from his fatal tortures in Regal's dungeons, Fitz has once more foiled Regal's attempts to be rid of him. Now, back in his own body, and after months of rehabilitation, Fitz begins the painful and slow process of learning the ways of a man again. Under the watchful eye of Burrich, old King Shrewd's Stablemaster, Fitz must learn to cast off the wild but carefree ways of the wolf and enter once more the human world: a world beset ever more viciously by the relentless Red Ship Raiders who are now left free to plunder any coastal town they please. But more immediately, a world in which he finds he is utterly alone.

After a time, Heart of the Pack set down his straps and wiped his hands on a cloth. He came to stand beside me, and I had to turn to be able to see him. I bent to sniff it and he struck my shoulder. Snarling at him made him very, very angry. For a time I held the straps. Then it seemed as if my hands remembered before my mind did. I watched my fingers work the leather. When it was done, I held it up before him and tugged it, hard, to show that it would hold even if the horse threw its head back.

I come. I rose from my chair. I went to the door.

Nighteyes waits, I told him. Then I remembered he could not hear me. I thought he could if he would try, but he would not try. I knew that if I spoke to him that way again, he would push me. He would not let me speak to Nighteyes that way much. He would even push Nighteyes if the wolf spoke too much to me.

It seemed a very strange thing. I have food here for you. A rabbit torn open, still steaming in the winter night. That was what I wanted. He went to the window and opened the shutters a little. The chill air rushed in. I could smell Nighteyes and, farther away, a snowcat. Nighteyes whined. I've not enough to feed you here. 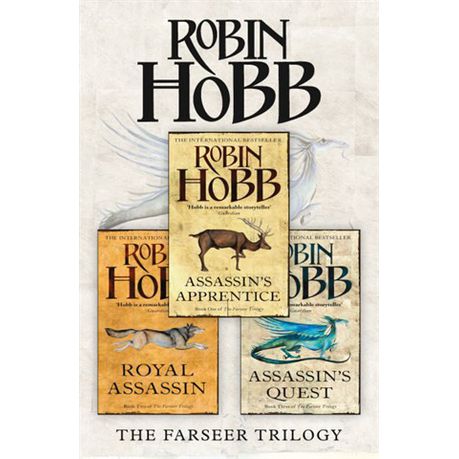 But he did not go too far. He was waiting out there for me, but I knew he could not wait long. Like me, he was hungry now. Heart of the Pack went to the fire that made the room too hot. There was a pot by it, and he poked it away from the fire and took the lid off.

Steam came out, and with it smells. Grain and roots, and a tiny bit of meat smell, almost boiled away.

But I was so hungry I snuffed after it. I started to whine, but Heart of the Pack made the eye-snarl again. So I went back to the hard chair. I sat. I waited. He took a very long time. He took all the leather from the table and put it on a hook. Then he put the pot of grease away. Then he brought the hot pot to the table. Then he set out two bowls and two cups. He put water in the cups.

He set out a knife and two spoons. From the cupboard he brought bread and a small pot of jam. He put the stew in the bowl before me, but I knew I could not touch it. I had to sit and not eat the food while he cut the bread and gave me a piece.

I could hold the bread, but I could not eat it until he sat down too, with his plate and his stew and his bread. Then he slowly sat down in his chair right beside me. I was holding the spoon and the bread and waiting, waiting, waiting. I didn't take my eyes off him but I could not keep my mouth from moving. It made him angry. I shut my mouth again.

Finally he said, "We will eat now. One bite I was allowed to take. It must be chewed and swallowed before I took more, or he would cuff me. I could take only as much stew as would fit on the spoon.

I picked up the cup and drank from it. He smiled at me. Good boy. I tried to chew it slowly, but I was so hungry now, and the food was here, and I did not understand why he would not just let me eat it now.

It took a long time to eat. He had made the stew too hot on purpose, so that I would burn my mouth if I took too big a bite. I thought about that for a bit. Then I said, "You made the food too hot on purpose. So I will be burned if I eat too fast. He nodded at me. I still finished eating before he did.

I had to sit on the chair until he had finished eating, too. Hey, boy? After a time, he got up and got a bottle. He poured something into his cup. He held the bottle out to me. Even the smell of it stung in my nostrils. No, it's bad water.

It's bad brandy. Blackberry brandy, very cheap. I used to hate it, you used to like it. He got up and went to the window. He opened it again. Nighteyes is as afraid of Heart of the Pack as I am. Once I attacked Heart of the Pack. I had been sick for a long time, but then I was better. I wished to go out to hunt and he would not let me. He stood before the door and I sprang on him.

He hit me with his fist, and then held me down. He is not bigger than I. But he is meaner, and more clever. He knows many ways to hold and most of them hurt.

He held me on the floor, on my back, with my throat bared and waiting for his teeth, for a long, long time. Every time I moved, he cuffed me. Nighteyes had snarled outside the house, but not very close to the door, and he had not tried to come in.

But he had only struck me again and held me there, throat wide, until I told him with my mouth, "Yes, I understand. He set it in front of me, where I would have to smell it. I snorted. You used to like it.

You used to drink it in town, when you were younger and not supposed to go into taverns without me. And then you would chew mint, and think I would not know what you had done.

I understood. Very often. But you will. Taste it.

Just a little bit. It might do you good. It stung my mouth and nose, and I could not snort the taste away. I spilled what was left in the cup. Wouldn't Patience be pleased" was all he said.

And then he made me get a cloth and clean what I had spilled. And clean the dishes in water and wipe them dry, too. Sometimes I would shake and fall down. There was no reason. Heart of the Pack would try to hold me still. Sometimes the shaking made me fall asleep. When I awakened later, I ached.

My chest hurt, my back hurt. Sometimes I bit my tongue. I did not like those times. They frightened Nighteyes.

The more obnoxious elements of her female fanbase on the other hand, are completely without redeeming qualities. She was originally planning to write more about FitzChivalry after the last book there is a strong hint of this in the last couple of pages , but she received so much vitriolic hate mail about him not shacking up with The Fool that she gave up on the idea.

Partly Fitz's preconceptions about love, partly the very profound physical and emotional differences between them. They ARE different species after all Originally Posted by GlennD. Originally Posted by TheLongshot. Oh god, these books. I read the first one when I was about fifteen and was mildly entertained, found the second one a slog, and the third one was good I don't know, they WERE good, and pretty well written, but they were also so angsty and it all started to seem a bit ridiculous after a while.

I'm sort of tempted by the other trilogies out of sheer curiosity but I have a TBR list that goes into the hundreds so I'll avoid for now. I did like the Fool though. Oh, I agree. I was just trying to put things into perspective: I agree, but I actually stopped midway through the first book, it was so dull, it hurt.

There is really nothing original in the book or the setting, unless a very annoying, whining, miserable loser protagonist counts as one. I will not touch anything by Hobb again.

Anything recommended by people who liked this is also highly suspicious. Similar authors who are also highly regarded but equally dull: Cherryh Connie Willis. Just a bit A good book has to pull me in, preferably from the start. But if it fails to do that halfway through, then I am out. The Farseer trilogy fails miserably.

I liked Covenant in the second trilogy. In the first chronicles, he's really carried along despite himself. Not to mention he's a big jerk and then some. In the second trilogy, his motivations are far more altruistic and he's far more likeable. All times are GMT The time now is Mark Forums Read. User Name. Remember Me? Tip Got Facebook?